A track is used to hold media files that need to be edited. In PawEditor, you can edit videos, audio, photos, transitions, filters, effects in different tracks and combine them into a final video.

When videos and photos show in the same location of the timeline but on different tracks, only the videos or photos on the uppermost track can be seen while the files underneath will be covered. For example, in the below screenshot, there are two videos, which are placed on the Track 1 and 2 respectively, and when playing in the preview window, only the video on the Track 2, the upper track, is displayed. 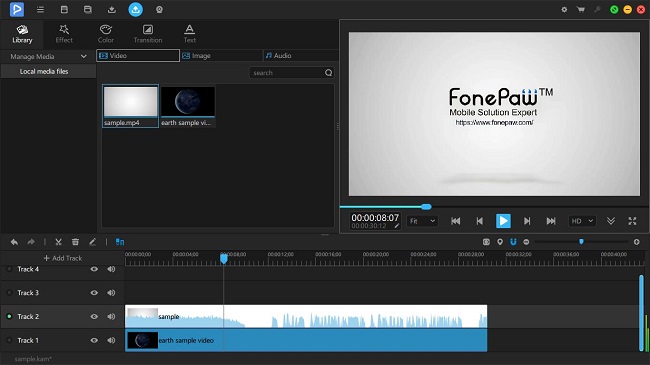 When two audio files or a audio file and a video with audio are placed in the same location of the timeline on different tracks, the audio will be mixed, which means the audience will hear two sounds in the video.

On each track, there are two buttons: the Show/Hide button

and the Mute/No Mute button

When muting an audio and video file, the video or audio file is muted when playing in the preview window.

When unmuting an audio and video file, the video or audio file can be played with sound in the preview window.